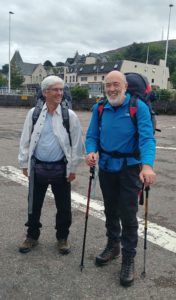 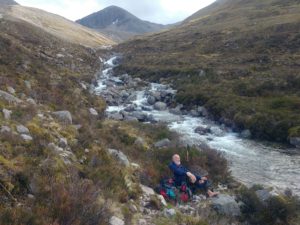 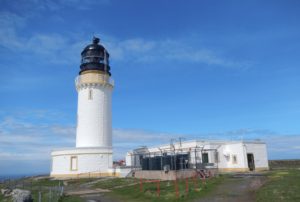 Mark and his walking partner resumed their mammoth trek in early May. This is often the best month in Scotland, but this year the weather threw almost everything at them!  At least the gale force winds and horizontal rain kept the midges away.

Re-starting from Inverie near Malaig, it was a challenging trek, with 330km still to go and 34,997 feet still to climb. Undaunted they strode on through some very wild and rugged terrain, clocking up the kilometres. They sent us the stunning photos above, and a couple of video clips which give a feel for just how wet and windy it is.

The geology of northwest Scotland is world-famous, with the oldest rocks in Britain, the oldest fossils in Europe and layers of rock pushed on top of one another by ancient mountain-building forces. Mark is an Earth Scientist, and his “rock-stops” made good excuses to ease off the 15kg packs and open the tea flasks. The views were amazing, particularly from the high mountain passes, or bealachs, in Gaelic. Two thirds of the nights were spent either under canvas or in basic mountain bothies, but this only made the few nights in B+B or hotels all the more welcome!

After 16 days walking and 3 rest days, the Cape Wrath lighthouse (and not least the Ozone Cafe) came finally into view… only to learn that the minibus and ferry were not running because of the high winds. Luckily, they were able to cadge a lift most of the way with a team who were restoring the historic engine which used to drive the lighthouse foghorn.

All in all a great achievement by a pair of 70 year olds!  They are already planning their next challenge, perhaps somewhere warm with decent wine…

Thanks to everyone who sponsored them – and if you didn’t, it’s not too late to add your sponsorship via our CAF giving platform!”

Posted in News and events